WHY YOU SHOULD WATCH “Modern Times” 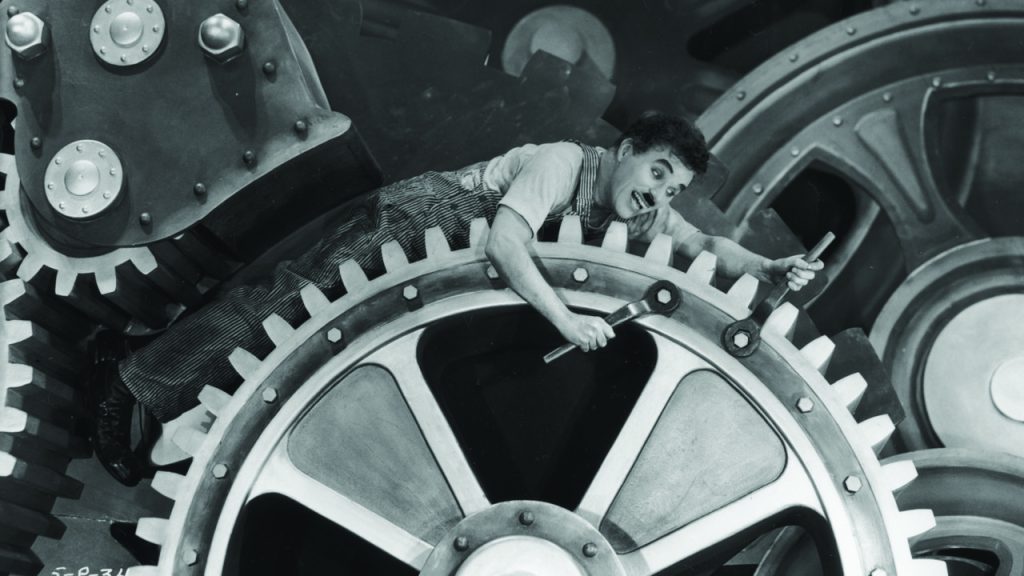 I first watched the film, for the very first time, with my father when I was a mere kid, of about ten to eleven years of age. We used to sit together during afternoons and watch Charlie Chaplin movies and Hollywood westerns, like The Searchers. Since then, I have watched this movie at least five times. Back then, it was just a fun thing for me—to watch Chaplin do his acrobatic skills and amuse the audience; but as I watched it again and again, I realized the deeper meaning to it, till the extent that it helped me see the world differently, through a more compassionate and understanding lens. The Tramps’ ever-present hopefulness surely helps me whenever I find myself in a difficult, uncertain moment. To me, this movie is very, very, personal.

Roger Ebert had said, “A lot of movies are said to be timeless, but somehow in their immortality they fail to draw audiences. (…)They’re classics, everyone agrees, but that word “classic” has become terribly cheap in relation to movies. It’s applied so promiscuously that by now the only thing you can be sure of about a “film classic” is that it isn’t actually in the current release. (…)One of the many remarkable things about Charlie Chaplin is that his films continue to hold up, to attract and delight audiences.”

Ebert proceeded to say that how, after 20 long years of absence, Chaplin still maintained his persona, and though, his crowd no longer cheered him as they did in the 1910s and 1920s, he still is one of the great figures in the movie-making world, and certainly one of the immortal heroes of the silver screen.

‘Modern Times’ was one of the two films, the other being ‘City Lights’, in which Chaplin made silent films when sound films were already beginning to be made. Believing that sound films “talkies” lacked the artistic touch and exposition of a silent film, he said, “I was determined to continue making silent films … I was a pantomimist and in that medium, I was unique and, without false modesty, a master.” After touring for sixteen months, he started to make ‘Modern Times’. The two would become his greatest, along with ‘Gold Rush’ and ‘The Great Dictator’, making him inseparable from political and social commentaries. His over-political approach brought him under controversies, leading to his exile from the US and settling in Switzerland. He was accused of communist associations, his scandalized paternity suit followed, and ultimately his involvement in marriages to younger women contributed to his decline in popularity.

‘Modern Times’ is a capture of machine superseding man. It begins with the title “Modern Times: a story of industry, of individual enterprise, humanity crusading in the pursuit of happiness.” Chaplin’s alter ego, “The Tramp”, working at Electro Steel Corporation, suffers inexplicably from the repetitiveness of his work, tightening of the bolts. He misses the bolts occasionally, which is rolled out to him on a dynamic surface of a conveyor belt, leading to the disarray of the combined work and he’s often berated by his immediate colleagues and superiors. Continuous work produces odd reflexes in him. His boss, who supervises the whole factory through his closed-circuit television, speeds up the machines on his will. There’s no time to breathe, certainly not to smoke.

At lunchtime, he becomes an experimental subject, which ends in utter embarrassment. The machine, which was initially trusted to feed the workers while working, malfunctions and is deemed unsuitable for use. “The Tramp” suffers from the craziness of the machine, without an explanation or an apology.

In the initial moments of the film, the tightening of the bolts is attractive. It is as if Chaplin is informing his audience that he is more powerful than ever, and he has certainly tightened his belt and is going to give them something that would remain lively in history.

Ultimately, he suffers a nervous breakdown. He slides on the conveyor belt, “throws himself down a chute into the belly of the factory”, before he is reverted. He goes berserk, tightening every (almost) looking bolt, and putting the factory in a haphazard environment. He plays with the controllers which react in sudden outbursts and throws a black fluid, presumably Tar, on the faces of the workers and the boss. Here again, Chaplin plays. He might be indicative; he might be throwing tar, straight at the faces of Capitalism, but we never know. It just might be a playful act of comedy.

He is sent to the hospital, as a consequence of his nervous breakdown. Following his recovery, he is told to not be too excited. On the streets, he is mistakenly arrested as a communist leader, when he picks up a red flag that falls from a truck, and finds himself leading the workers. Upon arrest, he is taken to the penitentiary. While having his lunch, he accidentally does cocaine, and in his subsequent delirium, performs a heroic act when a potential jailbreak is about to happen.

His heroism prompts the jail management to free him. Though he loves being in jail, where food and clothing are ensured, the jail issues him a free certificate.

While working, he commits an accident in the ship harbour where a ship sails to sea. He runs into “the gamine”, who’s fleeing the police after stealing a loaf of bread. Determined to be back at the jail, he says that he has stolen the bread instead. The woman, who initially sees Ellen stealing it, protests. “The gamine”, played by Paulette Goddard, is now arrested.  His failed attempt proves to be a source for another crime. He goes to an expensive restaurant, eats a lot; he doesn’t pay, instead, he calls a policeman, who was passing by, and gets arrested. In the police van, he meets Ellen, who’s being chased by the police and juvenile-care authorities. Upon meeting her, the “Tramp” is inspired to spend a happy “American Dream of domestic life, imagining themselves in a simple home in a suburban development” with her. The paddy wagon crashes and he flees with the gamine.

“The Tramp” manages to get a job as a night watchman at a department store. The department store is attacked by three burglars, whose leading man is “Big Bill”, his compatriot from the factory. Bill explains that they are hungry and desperate; “the Tramp” shares a drink with them and wakes up, the next day, amidst the chaos. He returns back to jail. When he returns from the prison, he finds “the gamine” has found a “home”, a dilapidated shabby shack, “comic version of the Hoovervilles of the period.”

He finds a job at Jetson Mill: an assistant to the mechanic. But almost immediately, the factory suffers a labour walkout. “The Tramp” accompanies them and accidentally throws a brick at a policeman. Again, he returns to the prison.

Meanwhile, “the gamine” has found a job in a café. She dances in the café, and when “the Tramp” is released from the prison, she persuades the café manager to hire “the Tramp” as a singing waiter. “The Tramp” acquires great fame, despite lacking social skills. During his floor show, he loses his cuffs, where the lyrics of the song are written. He compensates by gibberish, pantomiming, and improvising.

The police arrive to arrest “the gamine”, as she fled from the juvenile-care authorities, prompting them to flee again. In the midst of uncertainty, “the gamine” is discouraged. She asks, “What’s the use of trying?”

“The Tramp”, in his ever-present optimism, responds, “Buck up! We’ll get along!”

Her hands wrapped around his arm, they amble toward the uncertain horizon, to pursue and lead a better life as each other’s companions.

‘Modern Times’ is a “self-conscious valedictory to the pantomime of silent film Chaplin had pioneered and nurtured into one of the great art forms of the twentieth century”, as said by Jeffrey Vance. Chaplin knew this was going to be the last depiction of his “the Tramp” and quite intentionally, he sets “the Tramp” to walk into the unknown. “The Tramp” doesn’t know what his future would be; he doesn’t know if he would be called back. Rightfully so, Chaplin puts him into various stunts, the famous “Skating scene”, the various comical movements; as if, for the last time, “the Tramp” flaunts his acrobatic skills. As if he lets him do what he wants: “a homage to visual comedy”. This is the first and only time we hear him speak. And Chaplin made him sing! Perhaps only a mellifluous song would befit him. ‘Modern Times’ also boasts Chaplin’s greatest musical score, the most recognizable being “Smile“.

Moreover, ‘Modern Times’ is the last film of the silent era, demarcating the end of an era. The finest master of the silent films cast his hat with it; a signature ending. And in making it, he has done everything in his finest ways.

‘Modern Times’ is perhaps more relevant now than ever. In our expanding Capitalistic world, ‘Modern Times’ talks about not forgetting and trying to forgo humanity in a polished, mechanized, glossy world. This farsighted film registers the importance of living in ‘Modern Times’ without letting go of our morals and ideals. “Through its universal themes and comic inventiveness, the film remains one of Chaplin’s greatest and most enduring works.”, writes Jeffrey Vance. Most importantly, it is a document of Chaplin’s child, “The Tramp”, and its unmatched legacy in the silent era.

Author’s Profile: Sagnik Bhattacharya is a student from Kolkata. He currently studies in class 12 at Calcutta Boys’ School. He sometimes tests the water by writing stories and poetry.