THE CHENNAI RAINS AND THEIR CONSEQUENCES 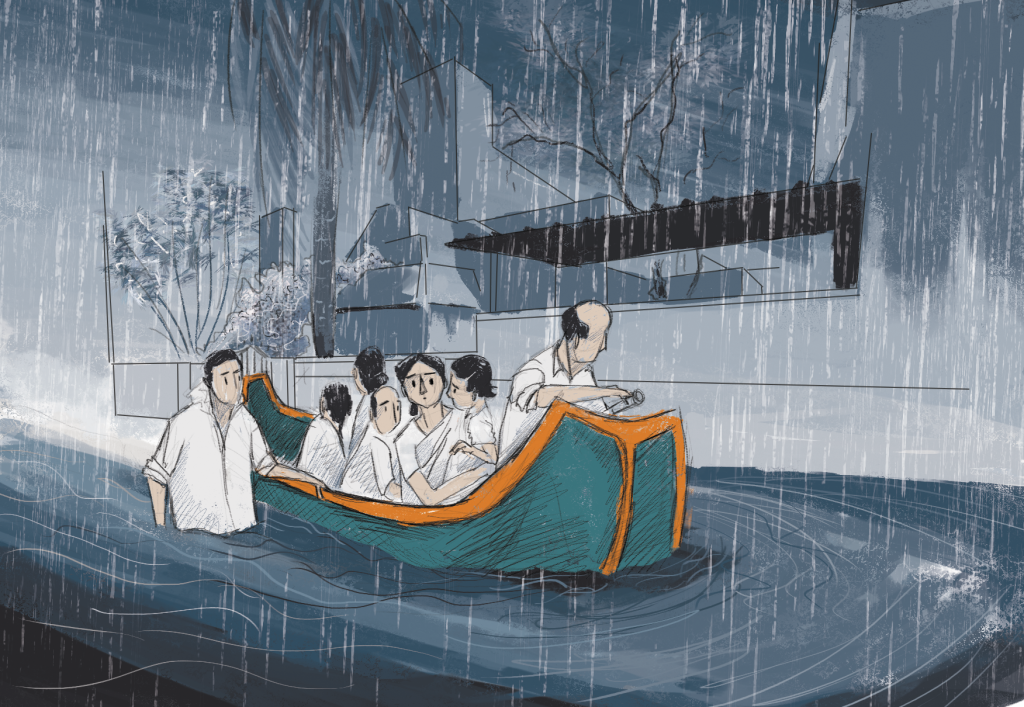 Rains are usually welcomed with open arms here in Tamil Nadu, as they provide a soothing escape from the warm, humid climate that is prevalent for the most part of the year. This year, however, the elation of the public soon vanished when the rains never ceased to stop. This onslaught of rain, caused by a depression formed in the Bay of Bengal is reportedly the heaviest since the 2015 flood. Crops were destroyed, schools were shut and travel became severely restricted as the roads were clogged with sewage and rainwater. People took hasty measures to stop the flooding from entering their own homes, arranging bags of sand to block the way as leeches and insects roamed around in the mud-brown water. The floods of the year 2015 were the worst for the people of Chennai. More than half the city was submerged in water, forcing people to use boats as a means of transport. 1.8 million people were forced out of their homes and at least four hundred lives were lost.

Chennai sits with an elevation that is much lower than the sea level, making it particularly prone to waterlogging. However, this recurring event cannot be solely chalked up to its topography or the torrential rain.  Chennai has 2780km of roads but the water drains only stretch up to 1,894km. This would have amounted to a sufficient preventative measure if it weren’t for the plastic and other garbage clogging these drains. The Planning Commission has suggested the construction of water drains to a length of 5000 km to properly flush out water, this action has not been implemented so far. Debris blocks the few remaining canals that will allow the water to flow through. Most open water bodies are too polluted and stagnant to let any water escape from the city. The Paliikaranani marshland which would have been a great aid in absorbing water has been turned into residential colonies and dumping yards. And with fewer places to hold water, the damage caused increases. All of this becomes especially alarming as the threat of global warming steadily rises every day, causing frequent depressions in the Bay of Bengal that will inevitably result in more floods.

What is assumed to be contradictory to the torrid water gushing on the streets is the water scarcity people face every summer. People standing in lines, waiting for the arrival of water trucks are a common sight. Floods during monsoon and droughts in the summer have become the norm for many citizens.

According to researchers at the Anna University of Chennai, the area of the city’s water bodies has shrunk from 12.6 square kilometres to about 3.2 kilometres between the years 1893 and 2017. The rainfall level of Chennai is quite uneven. When the monsoon season doesn’t bring in enough rain, the city is almost entirely dependent on water pipelines and desalination plants, the latter of which has been criticised for causing environmental damage as it has a negative impact on fisheries. In 2019, Chennai became one of the first major metropolitan cities in the world that was devoid of water, transporting 10million litres per day to meet this acute shortage. It has also been estimated that around 60% of the groundwater table will be severely degraded by 2030. This rapid depletion of our environment seems to be the price paid for unsustainable urbanisation and development. In 2003 the Government of Tamil Nadu passed a law requiring all buildings to have a rainwater harvesting system, this resulted in an increase in water level but the progress was soon diminished due to lack of maintenance. Efforts made to replenish the water table struggle to balance the amount of water extracted through boreholes. Water bodies continue to be encroached for constructions to satisfy the requirements of an exponentially increasing population. In this regard, however, The Hindu Religious and Charitable Endowment Department have taken measures to remove encroachments. Some new initiatives have been undertaken like the city of thousand tanks- which plans on renewing temple tanks and building new ones to filter and absorb heavy rains and recharge groundwater.

The issue of waterlogging and water scarcity both seem to stem from the same place – exploitation of resources and a lack of proper planning by the officials responsible. It has shed light on the inaccessibility of water and how situations like these affect some more than others. The case of Chennai has taken on the tone of a cautionary tale, warning the world of worse consequences that would be awaiting us if we don’t feel the need for change.

Priyangha Muthukumaran is an amateur writer from Chennai Tamil Nadu and a student of La Chatelaine junior college. She has won several literary competitions at her school and one of her stories has been previously published in Kloud9 magazine. Her passions include reading books and painting.