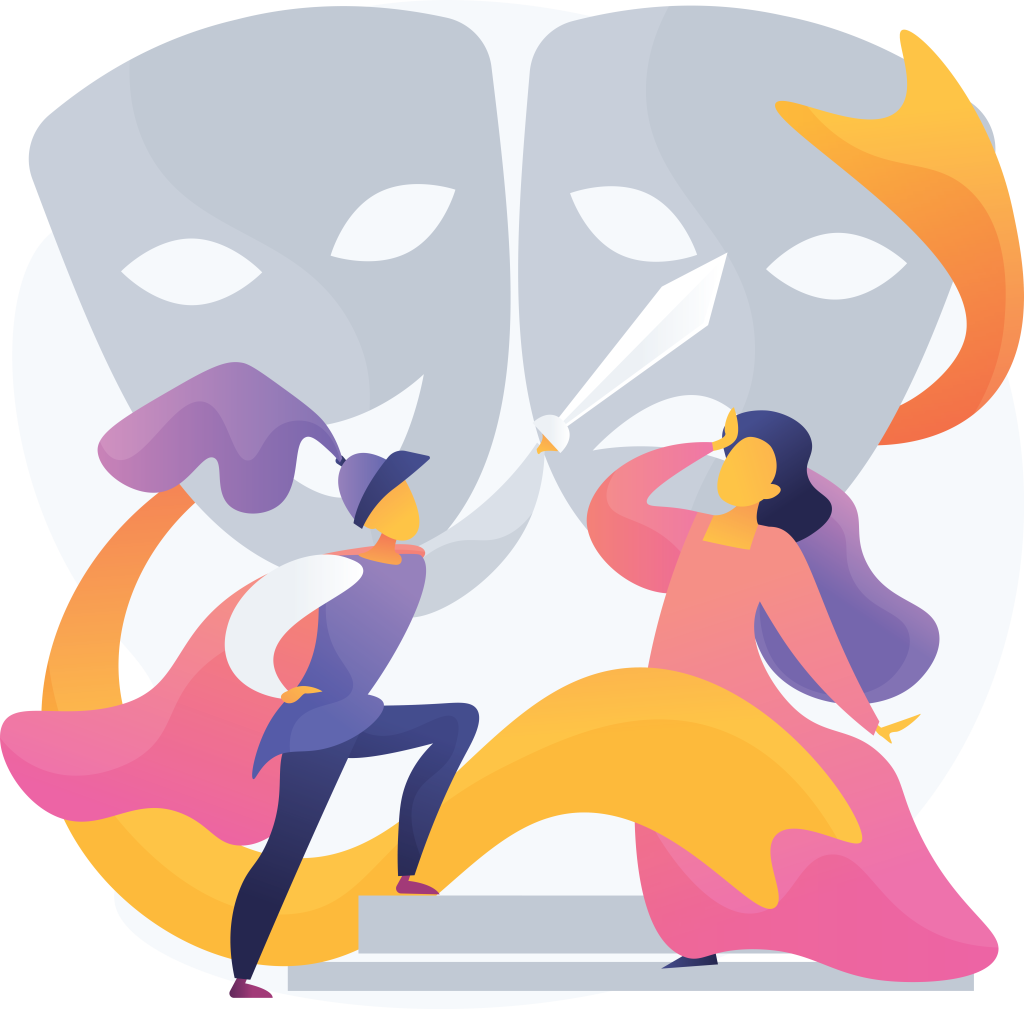 ‘Love looks not with the eyes, but with the mind; and therefore is winged Cupid painted blind.’

“No, give Titania the red velvet costume.”

“The spotlights should be focused right at the center, where Puck will stand.”

“ I think the neon wings will look better on the fairies.”

“No, it’s better if you enter a bit more dramatically. It will look better.”

Finally, I turned to face my team and asked, “ So are we ready for the act?”

“Okay so start once again and for goodness’ sake please get it right this time. We are doing extremely well, considering it is taking place at such short notice. Just some things need to be mastered.” I said in an encouraging tone. We were enacting the play by William Shakespeare named A Midsummer Night’s Dream and the play was to take place tomorrow. We had been informed just yesterday about it and since then everything has been a rush. Alicia, my best friend, looked at me her eyes shining, and said, “ I am loving this work. This is what I have always dreamt of doing.” “I know I love it too,” I whispered to her excitedly. Then turning back to face the whole team, I said, “ Okay so here we go.”

A couple of hours and some more rehearsals later, we finally took a water break. I sank into the chair, thoroughly exhausted. However, I was deeply satisfied. The play was going well and all the actors were very spontaneous. They always understood my vision and tried to enact it in the same way. Though it was my first time as a director, the team didn’t make me feel so. They made me feel completely at home and everyone was trying their best to make the play a hit. Though it was an amateur group, they were working as professionals. I said the same, aloud, making them all blush and smile.

Ever since my childhood, I had always been interested in the backstage. All that preparation, makeup, script reading, costumes, and everything else that wove the play behind the curtains used to always enthrall me more than anything. And so I was here directing my first play for The Royal Shakespeare Company, unarguably one of the most famous theatrical companies in the world. I had signed up for this with Alice, just for some fun, but over the years I had started getting into it before taking it up as my profession.

We practiced once more and then seeing everyone’s face I realized that everyone was extremely tired. So I rose and looked at the expectant faces around me, craving for some rest, and smiled, “ So that’s a wrap.” I called out. Immediately everyone heaved a sigh of relief and smiled. “We are almost done. I guess that just with one more practice we will do good. So one tomorrow morning? What do you say?” I asked. Everyone agreed. “Fine, then we will meet tomorrow morning. So for now good night. Eat and sleep well tonight, tomorrow is going to be a big day!” I collected my papers and accompanied Alice backstage to get my bag pack. “So my Hermia, are you nervous?”I asked playfully. “To be honest I am a bit nervous! I mean to work for such a prestigious play of The Royal Shakespeare Company and to play such an important role is taxing and nerve-wracking, especially if it has to be done at such short notice, but I feel happy. Thanks to these rehearsals I am feeling a lot more prepared.” “Good for you,” I said. I heard my name being called just then. I turned to see the director of the Company, Venecia Goodwill walk up to me. She smiled. “Seems like the actors are almost ready. Good Work Olivia.” She said enthusiastically. “Well Ma’am, honestly it wouldn’t be possible without the actors. I have a splendid team.” I said. She nodded and said, “ That’s so true. Anyways all the best for tomorrow. See you, bye.” She said walking away.

“Yeah so for the last time everyone,” I said. It was the next morning, the day of the play. I continued, “I want it to be your best shot. So one, two three, and there you go.” Everyone sprang into action. James who was playing Theseus walked in and started saying his dialogue. Then as the story unfolded, Hermia, Demetrius, and Lysander also entered the play. We were in the middle of the third act when all of a sudden, I saw Venecia at the curtains motioning me to come backstage. I asked everyone to continue while I was gone. I walked over to Venecia and said, “ Good Morning Ma’am!” “Yeah…Good Morning…” She said absent-mindedly. “Hey, I have something to tell you, can you come with me once?” “Sure,” I said and followed Venecia keeping my assistant director in charge of the rehearsal. Venecia entered a make-up room and I was surprised to see the owners of the Theatrical company seated there. And from the look on their faces, I could very well understand that whatever was about to come up wasn’t very pleasant.

“Oh my God.” I breathed a few minutes later. My guess had been correct. Something very wrong had happened and that was that a very precious diamond of the family heirloom of the Fayne family, the ones who owned the theatre, had suddenly vanished. According to John Fayne, the one to deal with the heirloom the last, he had been looking at the heirloom intently trying to sketch it. The local museum wanted to display an oil painting of it as one of the oldest antiques of England when he smelt smoke. He said in a defeated tone, “ I was so disturbed on getting the smell of smoke that I kept it on the table and rushed to see where the smoke was coming from. Once there, I noticed that the stove was on and the omelet on it was burning. After putting off the stove I again went inside took the heirloom and kept it carefully inside the box. I didn’t check it. The next day, that is today, when my son took it out, he suddenly asked all of us to gather and showed us that one of the diamonds was missing. Incidentally yesterday all the actors had also been to my house to try the dresses on and so..” “You mean you are suspecting one of them?!” I asked, the truth dawning on me. “ Actually yes. See I know that we should not accuse anyone without proof but it was very, very precious. We are just feeling helpless.” Finished his son, William. “Yeah I understand..but honestly sir my team is one of the best. I mean I have been working with them for a long time and I know most of them thoroughly. I don’t think there’s even a sliver of a chance that any one of them is responsible for this. Now as for the new ones we have on board this time…well yes I don’t know them very well but I don’t think anyone of them is capable of doing such a grave thing.I  mean this is pure stealing. I highly doubt that anyone knows anything about it. Did you search the place thoroughly?” I asked. “We did but in vain. We could find it nowhere.” Said, William. “Okay..” I said sighing heavily. “So then Olivia, we want you and Venecia to do something. We want you both to tell them that if anyone knows anything about it, then they should come to our office by today afternoon and tell us about it or we are calling the police.”

Stony silence greeted us as Venecia made this announcement after the rehearsal ended. “And lastly I would like to add that neither I nor Olivia believes that anybody of you could be responsible for this. However, we are being forced to work as we are being told. So… that’s pretty much it.” Angry murmurs greeted us after Venecia ended. Everyone was probably feeling that even me and Venecia believed in this and that wasn’t good. I feared that the team might break up resulting in the play losing the charm. So I added, “ Everyone, honestly I am very disturbed with the unexpected turn of events. I believe that there is a major misunderstanding and that all of us are innocent. So I don’t want this outstanding team to break up. Please, everyone, don’t let this get in the way of the beautiful bonding we all share.” On hearing the desperate tone in my voice everyone looked at us and understood that what I was saying was correct. The crowd had significantly calmed down a little by the time I ended saying this. I continued, “ So everyone the show must go on. And it starts in less than two hours so we need to get ready. Let’s start everyone.”

“Keep the dresses there.” “ Woah, Titania you look good.” The heavy stone that had settled on the team had now become lighter and it almost felt like things were getting normal. Needless to say, I was extremely happy to feel that. Like I said the best team ever. I was checking on everyone when I suddenly heard a yell. “Ouch!” Cried, Alicia. “ What happened?” I asked running over to her. “Something in the collar of this dress pricked me.” She shrieked. “What? Open it once.” I said. She obeyed. I took the dress from her and started feeling the collar for the sharp object. “Can’t have my main character getting herself injured before the play..” I murmured to myself. Suddenly the object pricked me too. I immediately asked Emma to come and open the stitches so that we could see what was inside. She brought her needle and opened the stitches. All of a sudden something rolled into my hands shining so brightly in the light that it almost blinded me. It was the heirloom diamond.

“Thank you.” Chorused my team together and bowed, drawing the play to a close. The play had gone beautifully well. After the diamond was found, all the tension had vanished between the actors and they gave a smashing performance. What had happened was that when John had kept the heirloom on the table, in the hurry he had failed to notice, that one of the diamonds had rolled over and fallen into the pile of costumes kept for the next day’s play. Incidentally, the one who had stitched it had also been in a hurry as she needed to get the costumes ready for the actors in time and had thus stitched the collar with the diamond in it. If it wouldn’t have pricked Alicia we would never have been able to figure out where it went. The diamond had then been restored to its rightful owner and the team had felt a wave of encouragement, now knowing that none of them was a thief. Presently the crowd rose to give a standing ovation to the actors.

Suddenly few of them started calling out a cry that gradually grew louder..,” The Director? Bring the director!”

And then someone pulled me to the front stage. Once there the time felt like it was passing in slow motion. Standing there, facing hundreds of people hooting, cheering, and clapping for us, showering us with love signifying how big a success it was, I felt like I was flying in mid-air. This play was like a child to me, something which I had woven with all the dreams, love, passion, and perfection I had in me. And so, I wanted to hold on to this moment, under the spotlight, forever.

Sudeshna Chandra is a fourteen-year-old girl, a student of Ashok Hall Girls’ Higher Secondary School, who is very passionate about English. She loves to read and also writes short stories. She has written more than ten short stories till now.