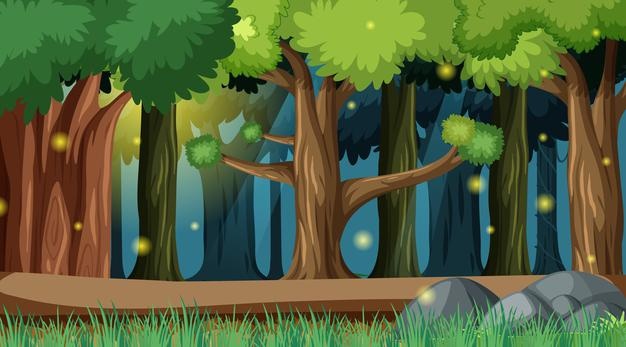 Sophie wandered around the forest humming to herself. She lived in a small cottage outside the forest with her parents and her young brother. She often explored the forest when she wanted to be alone.

Sophie skipped through a patch of wild daisies and ferns. She saw a beautiful butterfly fluttering around. She bent down to the butterfly.

‘Hi, mister.’ She said in a dreamy voice. ‘I wonder how it would be if I had wings. Maybe I could fly every time my younger brother irritated me. That’s quite often, do you have a younger brother?’ The young girl asked the butterfly not caring that he could not speak back to her.

The butterfly fluttered; the young girl took it as a yes.

‘They are pretty annoying, I agree. He cries a lot and takes up plenty of attention, but I do think I love him plus he is cute too.’ The butterfly fluttered off.

‘Oh well, I guess he did not want to talk.’ She thought.

Unfazed she skipped deeper into the forest. Sophie eventually came upon a family of four otters.

‘Hello.’ she said, again looking down at them. She looked at the bigger two otters that looked like they were the parents. The younger two otters chittered as they pushed each other as if having an argument. The parents looked tired.

She smiled ‘Are young children annoying? I wonder if I was. I know that my brother is. He always cries, but he is a kind soul too. He helped a chicken stuck in the fence the other day.’ She had a dreamy far-off look as she recounted it. She had been looking after him as her mother went out. She had gone to warm some milk in the kitchen when she had gone back to the table he was missing. She had gone in a frenzy checking under the tables and chairs. She was running to her mother in the garden when she saw him trying to free the chicken with his stubby little hands. She had been so relieved and had finally helped him free the chicken.

‘May I follow you?’ The otters chittered and took off. Taking that as a yes, she skipped following them.

Anyone would have thought that Sophie was a mental child, but she was very sane. Yes, she did talk like she lived far off, and yes; she did talk to animals but animals loved her too. Butterflies would sit in her hair if she sat still. Birds would fly around her. It was like they talked to her.

The otters weaved through the bushes and trees, not many would have been able to follow them, but Sophie skipped behind like it was nothing. Soon they came to a clearing. A small clear pond was in the middle. Trees bent providing shade everywhere. As if in a meeting several animals had gathered there. Sophie hummed ‘It is very beautiful.’

The animals did not flee like they would have for anyone else instead they came closer and soon formed a circle around her as if saying we trust you and will protect you. Then, suddenly she felt herself being lifted onto a stag back.

All the animals took off running as Sophie hung onto the stag’s neck. The wind whooshed through her hair. Small leaves tangled in her hair as the stag ran. The animals weaved through the trees and bushes. She closed her eyes, enjoying the sounds all around her. The quiet song or a bird. The silent vibrations of the stag’s hoof. Slowly she felt the stag’s muscles relaxing as he slowed down.

She opened her eyes to find herself in a cave. There were elevated platforms each filled with animals. She was in the middle. A ring of butterflies formed above her head. The stag placed a flower crown on her head. The animals bowed as if accepting her as their protector. Sophie kneeled to the ground scooping water from a small spring of clear water she drank from it. There was a glow around her as if sealing it.

Sophie went back to her cottage, still in a daze of what she had seen. The stag had given her a tour. She could sense great danger. Sophie would have great adventures while protecting the forest. Nature’s blessing would follow her everywhere she went. We can only wait for what happens next.

Aadya baste, is an amateur writer from Pune. She is a 9th-grade student at The Orchid School. She has sent a few articles and poems for Kloud 9. She loves to write about philosophy and nature.  She is passionate about reading, writing, and singing.