Shingeki no Kyojin: Projecting Human Experience Through a Dystopian Parallel 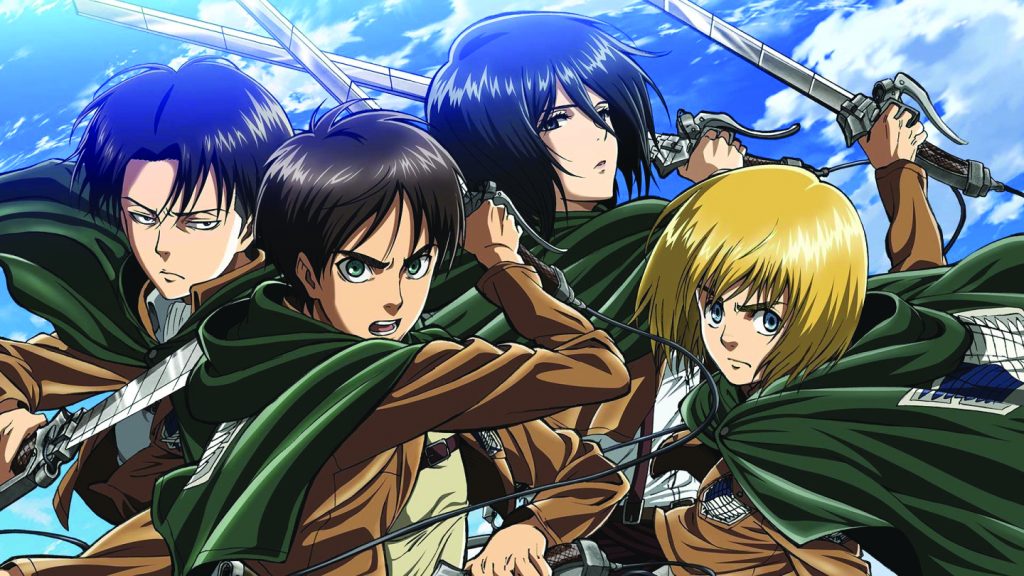 Wars of many kinds have graced the lands of humans since the survival of the fittest came into light with the evolution of humans descending on earth as the Animalia kingdom. About the time when God did not exist as a concept to rely and build hope on, Shingeki no Kyojin narrates a parallel story that carries the ancestral weight and surpasses it to its upcoming generations, thus creating a divide among mainstream society and the world behind the walls on the Paradis Island. The three walls enclose communities of Eldians divided as if mimicking the societal hierarchical structure in our contemporary society. The outermost wall Maria encloses the least privileged people who have only one wall barring the proximity to the titans. The place where the people reside is known as the Shiganshina district of Paradis Island. The middle wall Rose looks over political saviors who are the Survey Corps, Military Police, and the Garrison who contribute to the safekeeping of people inside the walls. The innermost wall Sina comprises the upperclassmen, the privileged, and the King who, due to their privilege, stay at a safe distance, hurling the outermost inhabitants into the pit of mortal peril. The story unravels an unfortunate terrorizing occurrence, as the people see humongous titans running towards the people, putting them with the intent of devouring them. Eren Jaeger, the protagonist, runs to save his mother trapped under the debris along with his friend Mikasa, who lived with them. Hopeless struggles later, a Garrison member Hannes saves the children but Eren witnesses his mother being eaten by a giant deformed titan. The memory etched inside his mind like a scar haunts him and fuels him towards his motivation to join the Survey Corps as he vows to kill each and every remaining titan.

Anger, distaste, ignorance, friendship, betrayal, and survival centers the entire plot along with other dominant themes with twists as the characters fall into a mess of turmoil, trying to find answers to the origins of titans and the future of humanity through the eyes of the fallen soldiers in the wake of defeating a seemingly never-ending war with the unknown. In the course of people finding out that humans can turn into titans, the bigger parts of the mystery unfold, revealing human nature in a very derogatory and disturbing way. A battlefield consists of sacrifice for the sake of the future, but the fruitless outcomes will always surface at dusk if knowledge is out of reach about who the real enemies are. Humans pitting against each other, divided into communities, and pursuing their beliefs is mirrored beautifully in a creative way in Attack on Titan that portrays the present contemporary world that we inhabit. Shingeki no Kyojin questions unity on the battlefield when soldiers are ruthlessly sacrificed as a merciless conclusion of fighting against the humanoid titans. Commander Erwin is a complicated character shown as a trusted officer who gambles everything in hopes of reaching a desperate answer capable of changing the fate of the people, in hopes of bringing new dawn. The flexible capability of humans turning into titans and devouring their former race is a spitting image of the easily manipulative nature of humans who can also be easily manipulated to fight against each other.

Is the determination to save people heroic enough to redo the ugly history and its manipulation among the mainstream human race? The evil judgment of punishment by the ignorant mainstream falsely learned beings are passed down on a particular race whose only sin is to exist. Is ancestral rage enough to justify the atrocities hurled at the present generation for existing? Is denying them knowledge for the sake of the sins of their ancestors as written by a manipulated historical fact justified? These acts revealed the true greedy nature of the humans who overcame many other historical wars united yet fall into greedy traps and ideological disparities that pit them against each other. Hajime Isayama featured the cannibalistic and gothic themes as the central themes and depicted the nature of the titans as such to match the equal retaliation of humans while fighting them with equally fatal measures. Titans are made with stunted or no intelligence and are made into distorted gigantic outgrown beings whose only act as existing is to devour humans is an ironic portrayal of humans wanting to push their kind to the edge of extinction as titans are ultimately made by humans and their unending rage against some particular community.

A very interesting character Armin Arlert is portrayed as an intelligent and sharp-minded who thinks of the best ending solutions and is an icon as well as an inspiration to humans to prioritise negotiation before any act of humans on their perception of right and wrong. “You can’t change anything unless you can discard a part of yourself too. To surpass monsters, you must be willing to abandon your humanity,” quotes Armin while trying to motivate Eren into turning into a titan to fight one of his kind who is his friend who became a rival. Armin has a prolonged dream to see the outside world, the oceans, and the cities while he shows the forbidden book to Eren that his grandfather had in his possession. He questions the people who stay inside the walls, fearful of the terror of the titans and the outside world, unable to comprehend the real mystery they hold. The survey corps charge headfirst into battle which brings them nothing but hatred from people who would rather stay inside the walls in safety and in ignorance, because ignorance is bliss, and humans would prefer being the happy fools rather than being the unhappy wise.

Attack on Titan, or Shingeki no Kyojin questions the human race and the ideologies that bring them up into confusing adults who question the whole system of the society and its structure while monitoring human nature in acts of selfishness, greediness, kindness, and empathy. Education and knowledge are portrayed as the greatest weapons of humans that can help them win any wars, but love, friendship, kindness, and empathy are what keep humans closely bound to each other as reliable creatures that can ask for help and provide help while keeping their well being in check. A balance in a dynamically distorted world is a utopian concept, just like the concept of binary. Evil, goodness, hatred, love are all extreme ends of human perception when their own needs collide with others against the abundance or lack of fulfillment of the same. Survival is a game of united battle together where knowledge and empathy play vital roles in the making of morality and ideological traits in a human being. The game of fair is foul and foul is fair is hardly a game of perception and humans are always on the edge of gambling on their fate as the wheels of time change with the blinks of eyes of millions of humans coexisting together, in differentiated ways.

Anjana Sanyal is an undergraduate student, pursuing English Honours at Gokhale Memorial Girls’ College, Calcutta University. She has freelanced and interned at various websites. Writing and literature are her necessary drugs of survival. She has completed her B.Mus in Rabindrasangeet from Bangiya Sangeet Parishad. Sketching is an occasional delight and she is a sucker for fall. Binges psychological thrillers and chooses the theatre of absurd for books.