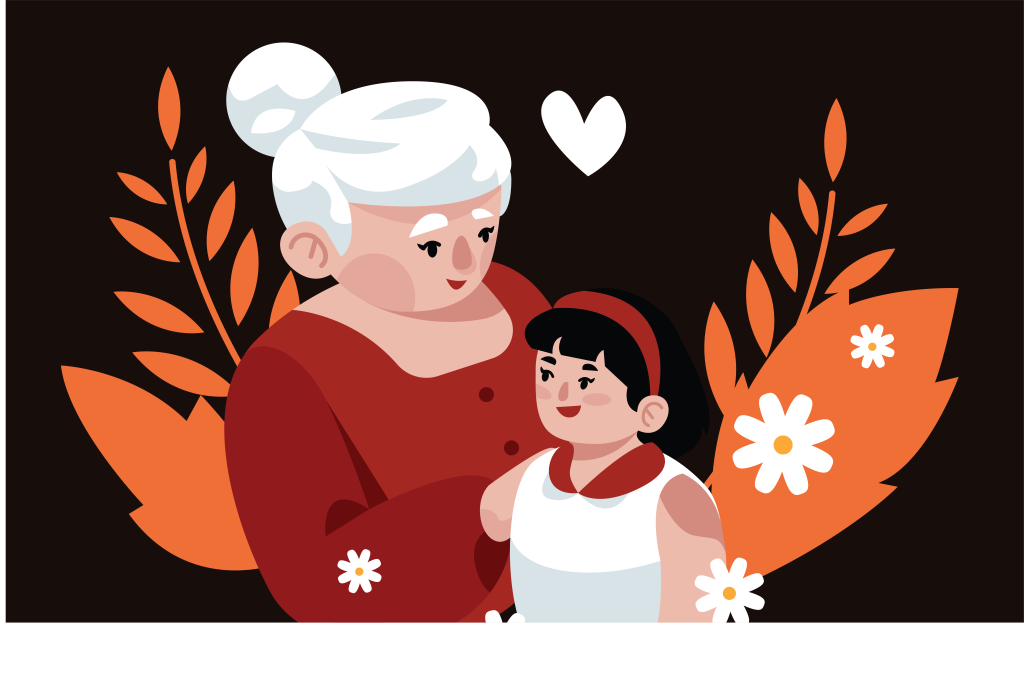 Although I was the apple of my parent’s eye, I was also a big slimy bundle of trouble. My mother was so done with my antics that she decided she didn’t want another one of me. A home-wrecking duo! My oh my! What amazing feats we could’ve accomplished!

A child’s brain is inevitably one of the most fascinating yet dumbest things to ever exist. I don’t really know from when my memory starts but I do know that my memories only consist of colourful blobs and outrageous ideas.

While I thought of myself as an extremely intimidating dictator, at the time I was nothing more than a big brooding whiny dwarf. So my parents hired a nanny for me. She was to feed me, play with me, pick me up and just stay with me from dawn to dusk. I called her Paati.

She first started working in our house when I was only about three or four months old. She was still there with us when we shifted our house more than twice! My parents tell me that she would dote on me like I was her very own. Of course, I couldn’t quite comprehend that when I was younger.

She completed her daily tasks efficiently. Feeding me was a struggle every day with how incredibly jumpy I was. She would always distract me with stories or animals that were moving about while discreetly shoving food into my mouth.

Paati would always hijack the tv though, watching Tamil movies when my parents weren’t around. The remote would magically reappear each time my parents were about to be home. But I didn’t mind. I watched along with her even though I couldn’t quite comprehend what was happening most of the time.

She would always take my side but also snitch on me when I put any of my atrocious plans into action.

I had the most brilliant idea to cut my own hair once. I remember sneaking the scissors and creating a very noticeable and appalling bald spot on my head. I had covered up my tracks though! I made sure to return the scissors to their right spot and push the hacked pieces of hair under the dresser. But much to my dismay and surprise, I was still caught. Paati snitched on me! I thought of her as a backstabber! A traitor to me and my incredible new hairdo!

Needless to say, I got into much trouble after that and I had to get a disgusting mushroom cut the next day from a ‘real’ barber since my mother deemed my bald spot repulsive. I was unreasonably angry at Paati for her betrayal but forgave her soon when she let me binge-watch cartoons on the tv.

Paati was also my knight in shining armour. She was always there when I got into a feud with my friends from the neighbourhood, she was there when I first spotted a snake and ran back home trembling with fear, she held my hand while I crossed the road, she was basically my saviour! She would always get into fights with my neighbours when their children troubled me a little too much. My mom was the one who usually ended up diffusing the situation!

It was me and Paati who was in charge of my two pet birds.

The two birds would always try to break free from their small cage and it would always devastate me whenever one of them managed to successfully plan their escape. There was a time when one of the birds got away from us. I sobbed and searched, ran around our quarters while shouting its name out loud. When I finally returned home, absolutely shattered, it was Paati who brought the bird back home.

She held it gently in between her two palms. I was so in awe of her and hugged her tight. I tailed her the whole day afterwards, following her everywhere she went because I wanted to be exactly like her!

I had kept ridiculous names for both my birds and I honestly can’t blame them for wanting to run away.

She walked me to the park and pushed my swing, held me when I fell, and wiped my tears away. She was there for all the festivals and all my birthdays. I can’t picture any important days of my early years without her.

I haven’t seen Paati for over ten years now. I can’t picture her face properly. It’s blurry in my memory. It was when I thought long and hard about my childhood that I realized that I couldn’t picture most of my major memories without her being there.

I don’t remember if I cried when she left her job because she was getting old. I don’t know how she is now and if she’s still there.

I asked my mom about her and she told me that she last heard about Paati when she had her leg amputated because of diabetes. I couldn’t quite comprehend what I felt after hearing that. I guess I just wish she could see me, all grown up, and realize that I still love her.

Charita V Suvarna is a seventeen-year-old amateur writer who dances and reads to fritter her time away. In particular, she enjoys reading books of fiction and writing in her free time.