Film In Focus – The Power of the Dog 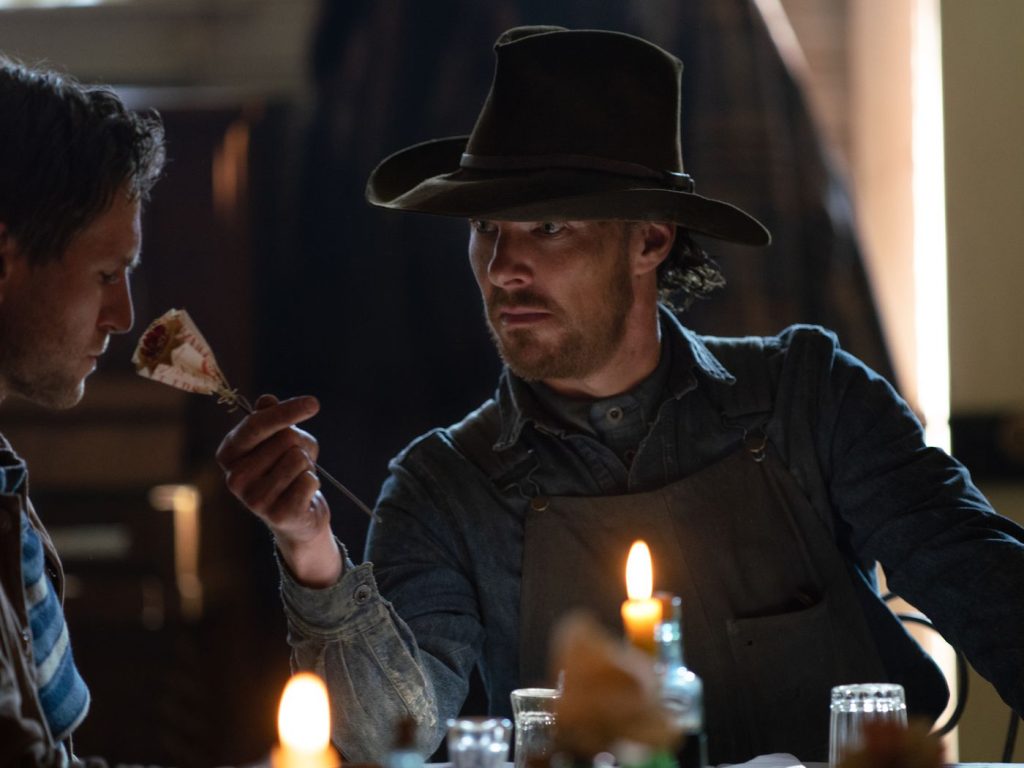 Jane Campion’s recent western, ‘The Power of the Dog’, based on Thomas Savage’s novel of the same name, treads on a different path than the typical westerns. It touches on the themes of ‘masculine crisis’, jealousy, love, torment, and resentment. It takes patience to enjoy it, as it goes on in a slow ride, to meticulously craft out the detachment of the characters from each other. As eerie as it gets, ‘The Power of the Dog’ doesn’t disappoint and it holds its composure and complexity till the very end. Notably, as I write, it won the Silver Lion in the 78th Venice International Film Festival for quite a number of nominations, including Best Director, and brought Jane Campion the Golden Globes for this year.

Phil and George Burbank, brothers who are wealthy ranchers in 1920 Montana, a western state in the United States, played by vibrant Benedict Cumberbatch and Jesse Plemons respectively, are characters who embody two men, juxtaposing each other. Phil, as seclusive and authoritative he can be, dominates the air out of his masculine crisis. George, on the other hand, is kind and gentle. Playing a kind of character he never played before, Benedict does commendable work to portray a man, rough like the scorched terrains of Montana. Phil hardly bathes, plays the banjo. And castrates the bull calves with his bare hands. A merciless, ruthless man.

The brothers halt at a restaurant, where they meet Rose. Phil mocks the widow Rose’s son, Peter, with cold, knife-sharp comments for his speech defect and shy manner.

George and Rose soon get married but Phil opposes it from the start believing that Rose is using George for his money. Regardless, George goes ahead with his wedding and soon Rose uses George’s money to send her son to college to study medicine and surgery while she moves into the Burbank ranch house. However, soon after she moves in, she is constantly belittled and insulted by Phil who forbids her from calling him ‘brother’. That coupled with the tensions from George’s parents and her own parents during the dinner party when she fails to play the piano causes a harmful effect on her mental health. Soon she falls into a downward spiral and begins drinking alcohol, something she was previously opposed to.

By the time Peter comes to stay at the ranch for the summer break, Rose has already become an alcoholic. To pass time, Peter starts trapping small rodents like rabbits and squirrels and begins dissecting them in hopes of learning more about being a surgeon. Although they get off on a bad start when Peter finds Phil bathing naked in the river which causes an outburst, later on, Phil begins to show decency to Peter. He even teaches him horse riding and making ropes out of hides. After learning how to ride a horse decently well, Peter heads out into the hills one day and finds the corpse of a cow, presumably dead from anthrax infection. He puts on gloves and cuts pieces of the cow’s hide. On a fencing job, Peter and Phil corner and kill a rabbit, and Phil gets an open wound on his hand. Afterwards, Peter tells Phil about finding the body of his alcoholic father, who had hanged himself and he had to cut the rope to bring him down.

Campion’s adaptation from Thomas Savage’s novel leaves out quite a number of details. Adapted to fit the medium of moving images, Campion pictures the moments raw to the core. Another beautiful feature is the shift of power. In the beginning, Rose is seen as a powerful woman, a threat to Phil. But gradually, she loses her power. She becomes an alcoholic and subsequently, the friendship between Phil and Peter, Rose’s son, blooms, which makes her unnerved.

“ ‘The Power of the Dog’ revels in this suspenseful place much like Phil prefers working with cattle than dealing with high society. Though the movie starts at a gentle pace, it doesn’t stay there long. There is so much layered desire, hatred, and domination that soon comes rolling out to disturb everyone’s uneasy peace. The game of wits between Phil and everyone else is a chilling one to watch, and it’s exactly the kind of end-of-the-year movie to finish things with a bang.” writes Monica Castillo.

Truly, The Power of the Dog is a much deeper film than just a western. The world it creates with eerie music by Johnny Greenwood is quite unmatched. The strings of the violins vibrate together, creeping into the audience and developing a sense of fear.

I loved the film. Though it was released in 2021, I really believe that it is going to be one of the best films of 2022, and I highly recommend it.

Sagnik Bhattacharya is a student from Kolkata. He currently studies in class 12 at Calcutta Boys’ School. He sometimes tests the water by writing stories and poetry.