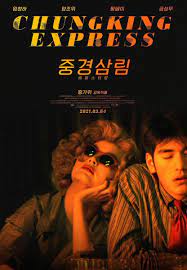 Chungking Express is a movie I feel will be enjoyed by everyone; but for a movie buff, it holds a soft spot. It is one of those movies which creates waves in a cinephile, taking him to the verge of tears. Let me assure you those are neither tears of joy nor sadness but tears out of sheer excitement. It takes on a rollercoaster ride, a jerking aeroplane gliding across the blue sky, inducing emotions with eyes and slow camera movements and stern walks and lousy ambling. Chungking Express is, in its truest sense, a fine piece of art.

Wong Kar Wai’s magnum opus( I really feel it’s although some may argue about In the mood for love), Chungking Express is two separate stories about love. Both stories involve tales of policemen.

In the first story, He Qiwu suffers a break-up with his girlfriend May on 1st April. His morose doesn’t lead him to believe it, so he waits for a month for her to return. He keeps the time by buying canned pineapples, which May likes, with an expiration date on 1st May.

On the other hand, a woman with blonde hair prepares a group of Indians to trespass cocaine. On arriving at the airport, she finds that she has lost the group and is taken aback. She searches for them, kidnaps the daughter of a man whom she has seen with the group of Indians and then realizes that she has been set up. Meanwhile, she also kills some goons. The story runs parallel with He Quiwe’s struggle of moving on.

On 1st May, as depressed as one can be, He Qiwu visits a bar called ‘Bottoms Up Club’. He meets the same blonde woman, who is terrified and tired of the dire consequences she is about to face, asleep. He Qiwu takes her to a hotel, where she sleeps and he eats and watches television. Before leaving, he takes her shoes, cleans them and keeps them in front of the entrance. In the morning, He Qiwu receives a happy birthday message from her and thinks he would never forget her. The blonde woman kills the drug lord who set him up.

The movie breaks up here. He Qiwu clashes against Faye, the new staff of the restaurant he often visits.

The second story is about cop 663, who again, similar to He Qiwu, struggles to move on after break up with his girlfriend. He thinks of her often. However, the new staff from the same restaurant, falls for her. One day, Cop 663’s girlfriend drops by a letter and a key for him in the restaurant. Faye learns of it and reads it. When Cop 663 arrives the next time, she tells him but he ignores her. She again meets him in the market, where he helps her grocery bags and invites her to his house. Faye uses the key to enter his apartment and redecorates his apartment, which is unknown to the cop. She does this multiple times. One day, he finds her in the apartment and she gets scared. He finds that she likes her and arranges for a date, in a restaurant called California. Faye doesn’t go and the man in the restaurant where Faye works hands Cop 663  a letter. He finds that there’s a drawn ticket, dated one year later.

When Faye becomes an air hostess, she returns to Hong Kong and finds the restaurant has been bought by Cop 663. He invites her to the occasion of unveiling and when she is about to leave, he shows her the napkin where Faye had drawn the ticket. She asks her where he wants to go to which the cop, no more a cop, replies anywhere she wants to.

Chungking Express is a celebration of the 1990s glorious era of Hong Kong cinema. Christopher Doyle’s magnificent cinematography has a special place in my heart. And, who can forget the Mamas and the Papas “California Dreamin’ “. In all, Chungking Express provides us with a wild, untamed thrill, only characteristic of Wong Kar Wai’s films.

Sagnik Bhattacharya is a student from Kolkata. He currently studies in class 12 at Calcutta Boys’ School. He sometimes tests the water by writing stories and poetry.