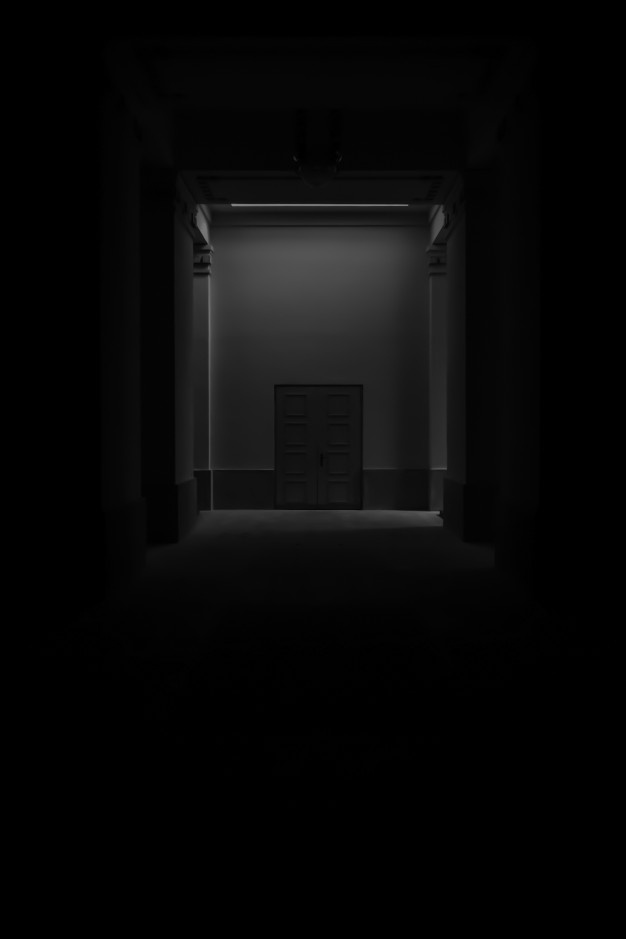 The candle flame I clutched onto illuminated the dark, musty hallway as I quickened my pace, eager yet terrified to reach the end. Despite the feeble light, the night enveloped the abandoned wing, seeming to come alive.

An antique statue of a man holding a long sword came into view, and I halted. Covered in cobwebs with rust covering almost every bit of it, the figure stood overbearingly tall. As I looked it over, an icy chill ran through my veins, and my father’s voice telling me that “Courage is not a virtue but a sin” echoed through my mind. But, no, I could not let him hold me back once more; I had come too far.

He was dead, and I had to find out why.

Shaking off my nerves, I hesitantly put down my candle and climbed onto the pedestal the statue was mounted upon. I poked and prodded the rusted figure, ignoring the revulsion that came over me from the feel of it. Finally, a loud creak shattered the eerie silence, and the wall beside me rose.

Stepping away, I sought solace in the candle as I picked it up again. But it proved to be futile as a blinding light overpowered my senses, tearing through the darkness.

I squinted while I let my eyes adjust to the sudden brightness and was met with a humongous chamber that was supposedly filled to the brim with precious jewels and treasure.

I entered it hesitantly with an inexplicable feeling of dread coming over me. It felt like the hidden room called to me, and I followed like prey to its predator. I knew it may result in my demise, but I let my heart guide me further.

My begrimed appearance held a stark contrast to the sparkling valuables surrounding me. Nevertheless, I continued, astonished by the piles of riches that lay concealed in my own home. Then, from my periphery, an exquisite pendant caught my attention. I approached it slowly, entranced by its beauty, and marveled at the sheer size of the scarlet ruby embellished into it.

I stood with my mouth agape, unsuspecting, and unaware of the danger I was in. Until a voice broke me out, my stupor. I spun on my heels to be met with a too familiar face.

“You shouldn’t be here,” he began, tossing a coin from one hand to another.

“Y-You,” I stuttered as my eyes widened and my heart shattered as I realized what was happening.

He said that it wasn’t what it seemed to be as he threw the coin aside carelessly and started towards me.

“It’s not what it looks like? You liar! You told me you knew nothing of his death!” I shouted and backed away from the monster that stood before me

“Celia, please, I didn’t do it. You know me. We’ve been friends for years.”

“That’s the thing, Edwin. I know you. I know that ever since we’ve been friends, the thing you have craved the most is money. Even when we were children, nothing held us back from going to the ends of the Earth to get what we crave the most, power. And I know that you killed my father to get what you wanted!” I cried out, a storm of tears rolling down my cheeks.

“No, that’s not what happens-“

I took hold of a dagger that lay to my side, “Tell. Me. The. Truth,” I threatened as I took one step closer to him with every word.

Our eyes bore into each other’s for what felt like an eternity until his pleading expression morphed into a proud scowl, and he said, “Fine. I did it. And you know what”, he continued, looking around, smirking, “I don’t regret it.”

I felt pure rage engulf me as I charged towards him, sword in hand and fury in my eyes.

“I hate you!” I shouted as I ran at him, determined to wipe the smirk off of his face even if it was the last thing I did.

It all happened in the blink of an eye, but he moved swiftly, unarming me and pinning me to the ground.

“Let me share with you a lesson hard learned, love,” he said, still sporting an unbearable grin. I once again looked into his eyes, the color of the ocean during a storm. Beautiful, but deadly.

“Courage is a sin, not a virtue. And power can only be gained through cunning,” he said as he plunged the dagger into my heart.

Blood reached my mouth as I gurgled and struggled under him, trying to get him back. But as my eyes blurred, his softened.

“Shh, it’ll be over soon, and you’ll see your father again. I love you, Celia. I’m sorry,” he whispered to me gently, and soon enough, I was met with another blinding light that welcomed me with warmth.

A story by Simran Kaur Dang, a student at The Shri Ram School, Moulsari, enjoys reading a good book with a bittersweet ending.  She’s all about collaboration, teamwork and leads life by the quote “Live and let live.”