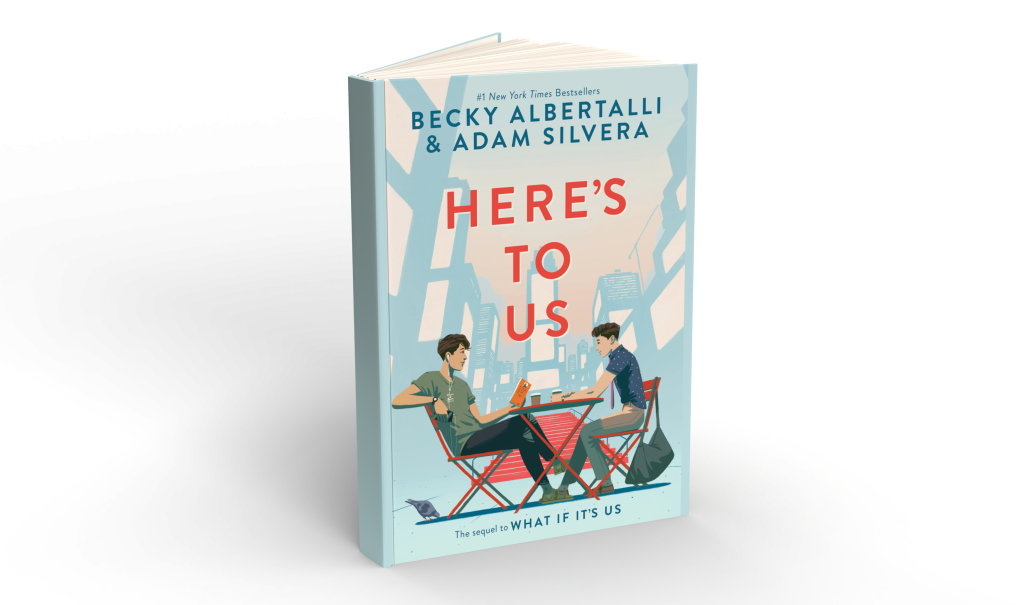 In simple words, this story taught me just how much depth and danger these two words hold. One wrong “what if ” and your whole future changes. The universe as we know is made of these countless “what-if’’s”. This story is about two people who believe in fate and the roleplay of the universe. People who are just like us, stuck in their mind’s dilemma of “what-if’s”. ‘Here’s To Us’ by Becky Albertalli and Adam Silvera is the sequel to one of my five-star reads ‘What If It’s Us’.  It is not just a contemporary romance between two homosexual characters, but so much more. It’s about friendships and hard decisions. It’s about fights with loved ones and broken relationships and how all this is woven delicately with perfection to its core.

There were mixed reactions to this book when it came out. On one hand, while the sad ending in the previous ending had left us wanting for more, it felt right. So, the news of a sequel coming out scared me a little as I thought it might have turned into an obvious story where the characters live happily ever after, and while I won’t object to that, it was the case with this book too, but well, we all love happy endings, right? I think the vast gap in the timelines between the two books helped ease the wound and made us believe in the tricks of the universe. Just like the characters, I too believed in fate and magic. Maybe some things are too good to be true. All this made me believe that this book was needed because the universe wouldn’t just leave Ben and Arthur to be each other’s “what-if”s right?

Ben, initially a summer school student and now in his first year of college is an aspiring writer. Unlike Arthur, he belongs to a rather financially challenged family. He is close to both his family and his identity as a Puerto Rican. Arthur, a rather intelligent student, a theatre geek, and a lover of all things in New York included Ben of course. He belongs to a family that is well-off with loving parents who have their fair share of fights. They meet by luck at a post office and their journey starts from there as both of them are played into the folds of life’s roller coaster with the book finally ending from where it all started – the post office. This along with a heartwarming epilogue, no doubt, left us in a spitfire of emotions.

“This is every relationship. You start with nothing and maybe end with everything.”

They had fights and made mistakes but all of them washed away with constant do-overs. The second book, however, was the biggest do-over of all. Both of them had new interests but the question is had they forgotten their previous ones? Or was the universe giving them signs again? Time had flown by and tables had turned. Arthur loved Ben more than Ben loved Arthur was something I saw in the first book but those dynamics easily changed as they acquired new love interests and that irony wasn’t lost on me.

This book also didn’t fail to show friendships in its best way. Dylan was a character I adored for many reasons, some being his quirky and ever-loving attitude. It showed how distance could affect inseparable friends and how the real world didn’t always have perfect friendships with zero fights and no heartbreaks.

Rather, it showed me the importance of the ones that outlasted all of them. I believe a good story is one where every character, big or small has their own story in the background. They are just as important to the plot as that of the main characters.

Conclusively, I would like to say that this book felt like reading the script of a rom-com I would watch every rainy day, curled up in my sheets, asking for love. It felt like a fanfiction I was addicted to. It made me sob furiously as I read it at 11:30 p.m. under the yellow light of my lamp. It made my handwriting wobble as I annotated my frustrations on the solemn beautiful pages. But most importantly it made me remember why I love reading and I am thankful for words like these for making me feel real, valid and happy.

Sejal Agarwal is a young dreamer in high school who finds relief in fiction. Books are her form of meditation. From mythology to escapist fiction, her love for the emotions that lie in words stands strong. If she could get one superpower, it would be to remember every detail from every novel she’s read.